In honor of the encore broadcast of CITY OF TREES tonight (August 21, 2018) on PBS/WORLD Channel's America ReFramed, we asked Washington Parks & People to reflect on the film and share current updates on the DC Green Corps.

Beyond the penetrating and powerful 76 minutes of Meridian Hill Pictures film City of Trees, Washington Parks & People’s central program of the DC Green Corps continues working to strengthen lives and communities eight years after its launch. Presented without narration in the cinema verité style, the film both raises important questions and, for the purpose of the narrative, leaves out much of the wider story and context of our work at Parks & People. Based on conversations we’ve heard following the film’s release and initial broadcast on public television in 2016, we wanted to share answers to a few key questions prompted by the film. 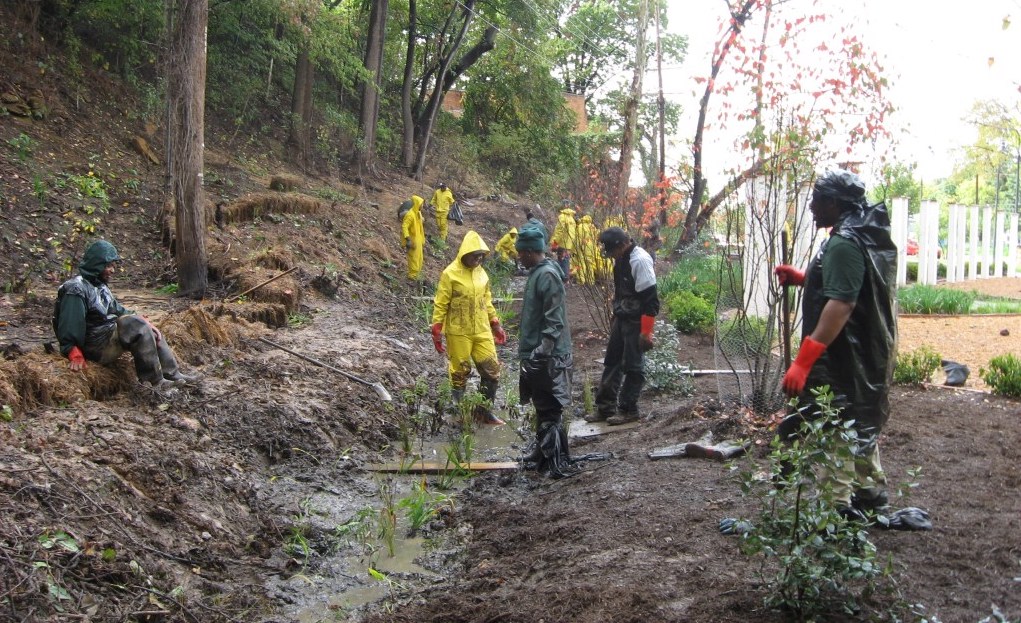 1. Did the DC Green Corps program continue after the stimulus grant expired?

Yes. The Green Corps never stopped and continues to strengthen, with one of our graduates now serving as the manager of the program. Since the fourth cohort of the 2012 period depicted in the film, we have graduated 13 more cohorts. A total of 225 people in 17 cohorts have now completed the full adult job and enterprise training and readiness program, and thousands of youth have now connected with the youth component of the Corps. The DC Green Corps is also a member of The Corps Network and is a certified part of the 21st Century Conservation Service Corps.

2. Did the trainees featured in the film get jobs?

Yes, all three of those portrayed in the film found jobs. Over 70% of Green Corps alumni have found follow-on jobs, contracts, and education within 90 days of graduating. They are working in urban forestry, landscaping, park revitalization, urban agriculture, green infrastructure, and a wide range of other trades. We find that the confidence and self-reliance of intensive public reclamation boosts readiness for all kinds of work. However, lasting employment remains a tough challenge for many who still face overwhelming discrimination and other hurdles. To address these challenges, Parks & People offers follow-on training, certification, and contract/ placement opportunities for all interested and qualified graduates.

3. How did Green Corps continue without the stimulus?

While Congress abruptly halted plans for Phase II of the economic stimulus, Parks & People has been able to continue and deepen the program through a combination of grants, contributions, contracts, and partner support. Parks & People also owns and operates a community-based social enterprise at the Josephine Butler Parks Center. Named after a late celebrated DC community activist who served as our chair, the once vacant property has become a community partnership hub now known as the “embassy of the Earth.” The building has become one of DC’s top event venues and houses a dozen local environmental, arts, and social justice-focused nonprofits. In addition to subsidizing the work of many other community partners, the earned income from this site now covers all of the organization’s core carrying costs and some of the costs of the Green Corps and other initiatives. This means that every penny given to the Green Corps program goes entirely to our impacts on the ground and in people’s lives.

4. How does Parks & People engage the community?

All of Parks & People’s work, spanning 28 years of impact by tens of thousands of people helping more than 230 diverse neighborhood green spaces across DC, is shaped by community needs, dreams, and strengths. We have been embedded in Far Northeast DC, where our headquarters is located and run by community residents, for over 17 years. We have found that community residents are the best experts for what needs to happen in the parks, and every park improvement or program begins with listening to the dreams of the youth and the memories of the elders. This is how the community created the ‘Down by the Riverside’ campaign for what is now called Marvin Gaye Park. That initiative has become the largest community-based park revitalization in DC history.

5. Do Green Corps grads continue with Parks & People after they graduate?

Yes. Many graduates continue with us in jobs, contracts, partner referrals, and ongoing training and leadership development. Parks & People stays in touch with all interested graduates through the Green Corps network, which helps Corps members support each other in all kinds of ways. Follow-up can be tough, as graduates still face many hurdles, sometimes move frequently, and change phone numbers. Parks & People is now seeking funding to expand our follow-on support for all members of the Corps.

6. Does the program have any wider impact beyond the individual trainees?

Absolutely. We have discovered that advancing environmental justice in underserved neighborhoods can have broad and profound impacts on public health, youth development, civic empowerment, crime and violence reduction, cultural understanding, and even many of the core structural causes of poverty. Our analysis found 20 different underpinnings of entrenched poverty that neighborhood green space transformation can help communities address.

7. How did Parks & People and the Green Corps begin? How has the program evolved?

Parks & People began in 1990 as a non-violent, interracial community crime patrol, trying to help stop the killing in what was then the most homicidal part of the murder capital of the US. We sought to use the power of community and nature to counter violence, ultimately cutting crime over 99% in what had been the most crime-ridden national park in the capital region. We then began to seek ways for the parks to provide jobs as an alternative to the drug economy. In 2006, we worked with the Department of the Environment to develop a teen summer environmental job readiness program in the parks. In 2009, we applied for and won a major federal stimulus grant from the US Forest Service to pilot the adult Green Corps program. Today, with a diversified mix of funding and partners, the Corps is becoming a lasting intergenerational community job readiness, leadership, and service program. Now we are seeking to expand it into a community-based green enterprise and contracting program as well.

8. What lessons has Parks & People learned from the Green Corps program?

Through a transparent process of testing and being willing to make mistakes and learn, we have continually refined the program. Here are some key lessons thus far:

9. Is the green economy generating the kind of lifeline that was anticipated?

Not yet. In addition to the problems resulting from discrimination, our city is still profoundly disinvesting in the environment around us, despite all evidence that it is absolutely pivotal for every aspect of our lives. Of 1,100 foundations based in the DC region, fewer than a dozen give to parks. The entire budget of the DC Department of Parks and Recreation is less than 0.5% of the total DC operating budget. Yet, with the right investment and partnerships, there is emerging evidence that healthy community parks can prevent crime like no prison, advance health and disease prevention like no emergency room, ground learning through expeditionary discovery like no classroom, ensure safe positive play like no recreation center, advance accessible and affordable fitness like no gym, generate accessible healthy food like no supermarket, ground-truth public policy like no windowless hearing room, and generate community investment and jobs like no bank. This is the essence of Parks & People’s ‘Think Outside’ Campaign, through which we are working to help expand the local green economy and to boost opportunities for Green Corps graduates to work in it.

10. What is the future of the Green Corps?

The Corps is now at the center of everything that Parks & People does — all our staffing decisions, partnerships, and programming. We see several opportunities to deepen its impact:

As it continues to expand and evolve, the Green Corps is an increasing model for communities and cities everywhere. Parks & People is honored and humbled by all that our trainees and communities continue to teach us about the promise of true environmental justice and opportunity for all. Through the City of Trees film, what began as a series of conversations and efforts in some of the most forgotten places in our Nation’s Capital is now growing into a national and international exchange of best practices and possibilities. Collectively, this effort is transforming how we learn, live, and lift up nature and each other across all our community lands and gathering places. Please join us!

Additional questions for reflection and action: